We explore here a point of intersection in two journeys of differing spatial and temporal scales: an inter-suburban railway commute and a journey of migration that spans across continental distances. 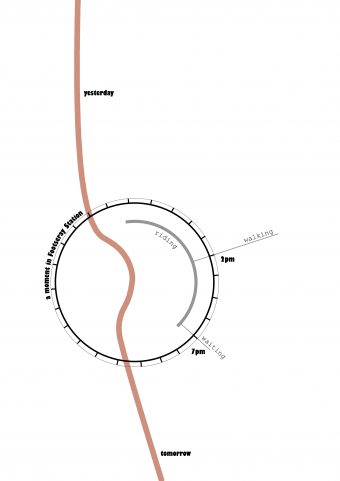 Migration is often experienced as temporally linear, its beginnings linked to another time (in the past), and spatially it is vertically linked to another place. We consider how this intersects with a moment in Footscray[1], a multicultural suburb in western Melbourne. The day, experienced temporally in a cyclical way, has within it a nested, smaller scale experience of time through an inter-suburban commute. Moments in this commute, of walking, waiting and riding allow lateral linkages to be made to the here and now, gaining context and meaning with the urban conditions the body encounters.

We explore fragments of this intersection, specifically the moments of waiting and walking, contextualising them through their lateral and vertical linkages in time and space.

An elderly couple sit on the bench in front of me. They say they are waiting for their son. They ask me to open a warm container for them – she says her husband is cold and they proceed to arrange the tiffin box type containers across the bench and their laps. The food has the distinct aroma of pandanus leaf. There are sounds of eating, and cutlery against the metal containers. They drop some of the food on to the ground to the side of the bench. I sense the warmth of the food from the steam.

With the aim of warming themselves, this elderly Vietnamese couple were able to create a distinct sensescape[2] around them of familiar smells, tastes and textures. This sensescape permeated through them with ingestion. With the enacting of this activity they were able to bring themselves comfort through familiarity and warmth against the growing darkness and cold of the evening in the wider urban landscape.

The sensory order or sensorium is described as “…society’s embodied cultural model consisting of the “sensibilities that are exhibited by people who have grown up within that tradition.”[3] Diasporic communities reproduce these culturally conditioned sensory orders. The sounds and smells from everyday activities contribute to the sensescapes that are, however fleeting; validate presence, expressing social and cultural distinction. Sociologist Amanda Wise argues that a dissonance between the sensory orders of cultures contributes to racial prejudice and the anxiety developed around the experience of diversity.[4] 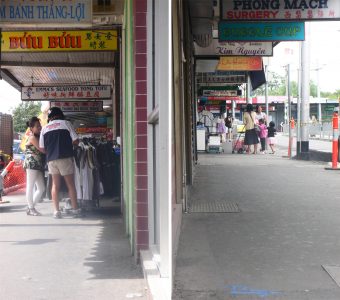 The clothes retailers bring out racks of clothes onto the pavement. When a potential customer pauses near the clothes they come out and talk to them. They seem to know some of them personally. Some customers pull out things from shopping bags that they had bought elsewhere to show and discuss. The proximity of the displays makes people reach out and touch them as they walk past. As some people linger, others join, and they interact, share a smoke.

Goods are displayed on the pavement outside shops to attract pedestrians moving from the station to the Footscray Market.  The moment presented here demonstrates the particular social space that is generated around these free-standing clothes displays along the pavement. In his book Life is not Complete without Shopping which examines consumption culture in Singapore, Chua Beng Huat describes bodies as expanding when confronted with displays that entice embodied involvement, “The informal character of such displays invites anyone who passes by, hailing one to reach out, touch, pick up and try items….”[5] In contrast, he describes how goods in the upmarket section of the mall are in clearly defined spaces that create an invisible barrier between the merchandise and the body, discouraging touching, causing the body to shrink. The space where the body is allowed to expand and engage in embodied activity is also a space that is convivial to social interaction. Hence, the pavement becomes a setting for chance meetings with acquaintances.

These fragments of socio-spatial practices in Footscray have lateral and vertical linkages, deriving meaning not only from the urbanism encountered but through distant memories of other places produced by various ancestral and geo–political histories and genealogies. These practices, informed by other ways of knowing and being, are significant because they allow bodies that do not possess social capital, inhabiting tentative citizenship, to exercise agency and engage in the production of place.

[1] Footscray’s proximity to the city and strong connectivity to public transport networks meant that it became and continues to be, a thriving hub of social and economic activity, particularly for multicultural groups.

[3] Kathryn Lynn Geurts, Culture and the Senses: Bodily Ways of Knowing in an African Community, (Berkley: University of California Press, 2002), 59.

[5] Chua Beng Huat, Life is not Complete without Shopping, 51.

Kelum Palipane is a graduate architect who lectures at the University of Melbourne. Her interests include researching migrant experience and identity, exploring how unprogrammed spatial practices of multicultural communities can inform design.Iderlina Mateo-Babiano is an architect and planner lecturing at the University of Melbourne. Focusing on the Asia-Pacific region she researches transport mobility and accessibility challenges including how the built environment influences transport participation and use. View all posts by Kelum Palipane and Iderlina Mateo-Babiano

1 thought on “INTERSECTING FRAGMENTS OF ‘TRANSPORT AND PLACE’ IN FOOTSCRAY”