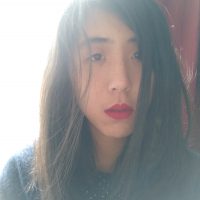 Shu-Ling Chua is an essayist, critic and poet. Her work focusses on femininity, self-narrative(s) and image and has appeared in Meanjin, Triangle House Review, Rabbit, Sine Theta and elsewhere. Her current writing obsessions include fashion, lineage, memory, glamour, pop songs and old Chinese singer-actresses. She writes with the aim of making at least one person feel less alone.

Shu-Ling sits on the board of Peril Magazine and has completed writing residencies at the Wheeler Centre and KSP Writers’ Centre. She was shortlisted in the 2018 Woollahra Digital Literary Award and highly commended in the 2017 Feminartsy Memoir Prize.

Here, Shu-Ling talks with Peril Chair, Eleanor Jackson, about her work, Commute, as a part of a collaborative series of interviews for Red Dirt Poetry Festival. Compressed and elegant, Commute, takes note of the habit and ritual of the daily journeys to work we all once took for granted. You can follow Shu-Ling on Twitter @hellopollyanna.