This is part of a series of ekphrastic poems presented alongside ‘Hyphenated’ at The Substation. ‘A Thousand Blooms’ responds to Vipoo Srilivasa’s work. 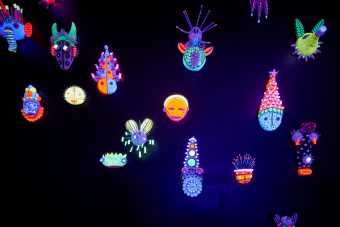 Look here, children—
There, by your feet,
A tiny yellow flower!

‘Don’t Trample This Flower’, Bing Xin,
translated from the Chinese by Herbert Batt and Sheldon Zitner

Little ones, let’s put pencil to paper—
draw the backyard rooster, sketch your loyal dog:
one to announce daybreak, the other to watch all night.

Let’s shape their bodies with our hands.
Let’s gouge out cavities with our fingers.
We are a hundred lidless eyes.

You there, go out into the desert.
Come back when you’ve stopped weeping.
Who shall we drown in glass today?
Who will withstand the flames?

The blue-and-white vases are broken.
They made us walk across the shards.
Our cut feet are a thousand crimson blooms.
It’s certain death for flowers without roots.

The Masks of Me
2018
Mixed media installation
Dimensions variable

A mask is an object normally worn on the face, typically for protection, disguise, performance, or entertainment. Masks have been used since antiquity for both ceremonial and practical purposes.

Living in two different cultures, I have become fascinated by cultural differences. The situation not only allows me to create work that blend the best of both cultures, but also teaches me about cultural appropriation and how to blend in or stand out.

For the Hyphenated exhibition, I created a group of small masks that celebrate cultural differences and diversity. Through shape, decoration, colour, material and facial expression, each mask reflects on my personal experience of living in two worlds.

A Thai born, Melbourne based artist, curator and arts activist, Vipoo Srivilasa works predominantly in ceramics but also produce works on paper and mixed media sculptures. Vipoo’s works explore similarities between the cultures of his native home, Thailand and his adoptive home, Australia as well as exploring cultural shifts and migration experiences. His work is a playful mix of European historical figurative and Asian decorative art practices with a healthy dose of contemporary culture. Vipoo is known for his clever, quirky, zoomorphic figures, which blend the artist’s playful spirit and social consciousness, just as they blend pop and folk culture. His work requires an intimacy in which the key elements of the drama are often found in unusual places within the forms themselves.

In addition to exhibiting his work, Vipoo has actively initiated and organised cultural exchange projects between national and international artists. His recent major project was Beyond Limitations, a cultural exchange between Australian and Korean ceramic artists through a mentoring camp. The project took place in 2015 at Gimhae Museum, Korea. Vipoo’s work has been exhibited in major art institutes around the world and has been a recipient of many major awards.

Eileen Chong is a Sydney poet. Her books are Burning Rice (2012), Peony (2014) and Painting Red Orchids (2016), all from Pitt Street Poetry. She has shortlisted for the Anne Elder Award 2012, the Prime Minister's Literary Award 2013 and the Victorian Premier's Literary Award 2017, among others. Her next book, Another Language (2017), is in the Braziller Series of Australian Poets with George Braziller in New York City. eileenchong.com.au View all posts by Eileen Chong