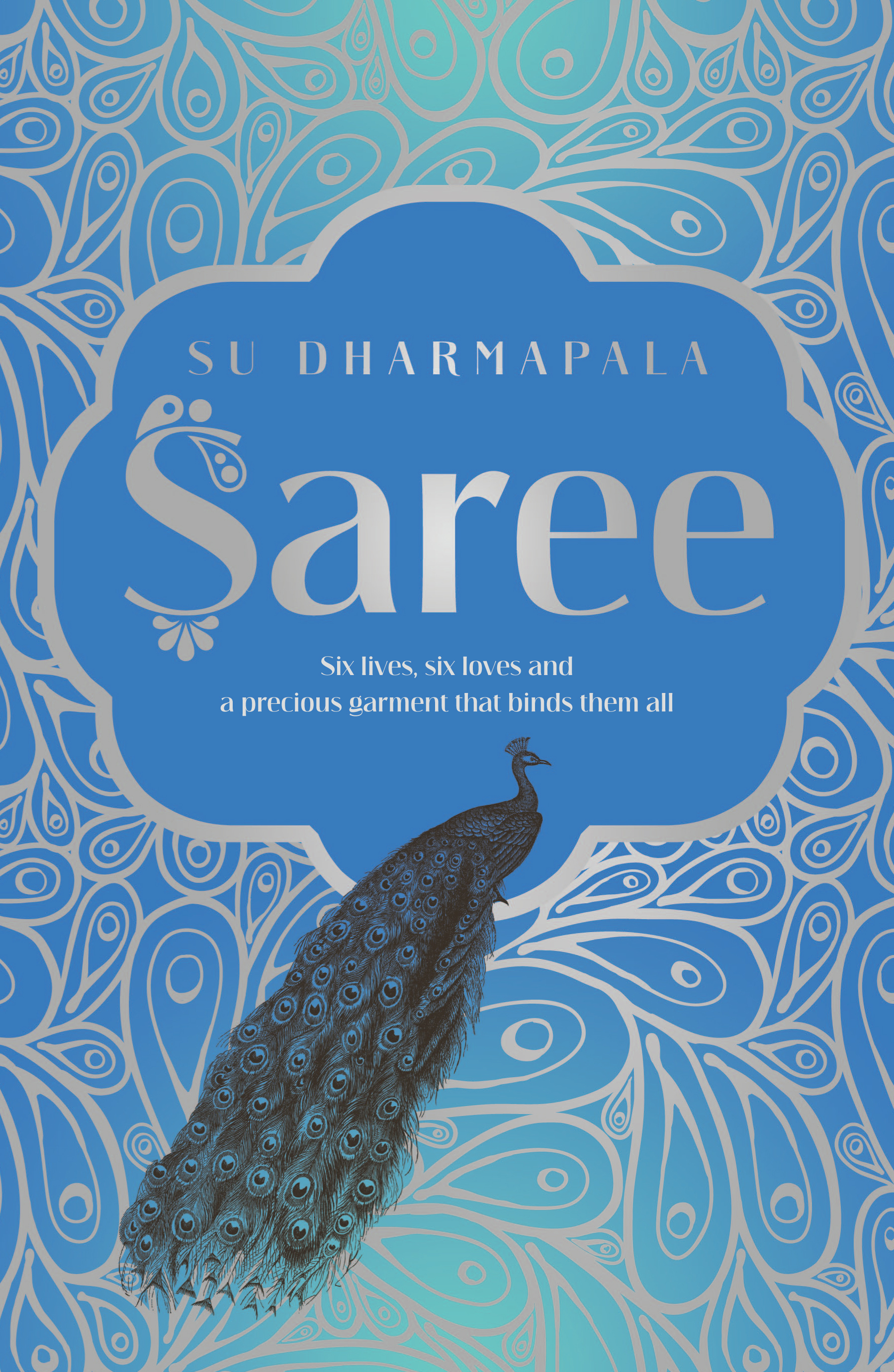 This extract comes from Su Dharmapala’s novel Saree, a story of beauty, oppression and freedom that spans thirty years in Sri Lanka, India and Australia. Published in 2014 by Simon & Schuster. Purchase paperback or ebook online here.

The Grand Old Hotel in Bandarawela was abuzz. Everybody and everything was quivering with excitement. Even the flying cockroaches knew better than to show their ugly faces that evening, hiding away in nook and crevice to return to exasperate the cleaning staff after the party. Plantation families from all over the hill country and the crème de la crème of Colombo high society had been pouring into Bandarawela for a fortnight now, and tonight was the height of the tea harvest festivities.

By early evening a large contingent of older gentlemen had retired to the downstairs bar to nurse tumblers of scotch, needing a break from the hysterics and hijinks, but a whole battalion of younger men remained, and had taken station near the foot of the grand staircase. They were there to watch the debutantes as they made their way down the ancient stairwell.

For there was money riding on it – on which of the young ladies would take a tumble swathed in a saree for the first time. And there was money on who would show the most leg while engaged in the delicate task of hitching her pleats to step down the first stair.

There was also another wager afoot, but this one was discussed only in sly whispers, for the boys were petrified – truly petrified – of being caught by their wives or mothers. Why, if the stakes of the wager were to be revealed, well, it would most definitely result in a scolding of the severest kind, or goodness knows what! All that could be discerned, even by the nosiest of waiters, was that it involved Piyasili Ranasinghe’s new friend, the flirtatious Miss Anoja Mendis.

But above stairs, the Mendis name was being used in quite a different way altogether. For Nila Mendis was being feted by all and sundry. Several harried lady’s servants were employed in the task of simply hurrying her from one dressing-room to the other!

Nila’s rise to fame had come as something of a surprise. The group from Nair & Sons had set up their annual stall that morning and waited for customers as usual. Raju did most of the selling while the others assisted him. That was until Nila helped sell a saree to one of the more elderly ladies who’d come in.

The matriarch of a large rubber plantation family, she’d long since relinquished bright colours in favour of whites and beiges as an emblem of her widowhood. ‘Raju told me she never buys anything,’ Devika had hissed at Nila as the old woman walked up. ‘He asked me to ask you to deal with her.’ Raju had been assiduously ignoring Nila since their stony ride to Bandarawela the day before.

Nila approached the older lady and waited for her to speak first. ‘I am not looking for anything,’ the older lady had snapped, so Nila kept a respectful distance while still shadow­ing her through the stall.

‘Do you have anything in white?’

‘Do you need a saree for temple, madam?’

‘No, I need a white saree for tonight!’

‘I do have some white sarees that are suitable for temple or funeral wear, but I don’t have any that would be suitable for a grand party.’

‘What about that silk saree hanging there? That white one with the silver border? Are you blind?’

And with the practice born of dealing with the elderly Mrs Vasha, Nila was able to gently guide the lady away from the garish white drape with delicate humour. ‘Oh madam, that would sooner suit a Bharatanatyam dancer than a lady!’

‘Why should I buy any sarees when I am one foot in the grave?’ the old woman growled, tossing her jewelled hands in the air.

‘Because then you’ll be well dressed in your coffin. Do you want the gossips to say that they had you dressed in rags?’

‘Oh, if only that is all they would say! They’ll say I was a crotchety, stingy old woman!’

‘Stingy. All old people are crotchety. How can anyone be cheerful when their joints hurt?’

‘Ha! You are a funny girl. I like you!’ the woman had laughed. ‘Of course I am stingy. How can a person not be stingy if they have people constantly asking them for money? I need a new a new car! I need two new servants! We need more equipment for the plantation!’ she said, mimicking her whiny offspring. ‘They’d leave me to die if I didn’t hold the purse strings.’

‘Oh madam, why not spend a little money on yourself, then?’

‘At my age? No. They’ll say I am wasting their inheritance,’ the lady muttered.

Nila understood. The old lady was lonely. Lonely despite living in a household with a large extended family.

‘Madam, I am not going to tell you to buy a saree. I think the saree you have on right now is pretty enough for tonight. But let’s have a look at some sarees for fun,’ Nila suggested kindly.

For the next half hour, Nila and the old lady simply enjoyed themselves looking at the various sarees – touching their soft silk, playing with the beads that made up the potta and inhaling the fragrance of the sea still clinging to the yards of fabric.

‘You know, Miss Nila, when I was a young girl my father took my family down to Hambantota for a holiday by the beach,’ the old lady reminisced as Nila selected a soft white saree with an aquamarine wave motif from a pile that had been set aside for the young debutantes. Nila had noticed the lady’s eyes straying over the saree several times. ‘I spent two whole months there. It was the best time of my life,’ the woman confided as Nila draped the new saree over the one she was already wearing.

‘Was it just the holiday by the beach or was there anything more?’

‘Since you ask, yes. I fell in love with a young man who used to catch the bus every morning for school. I never met him – I didn’t even speak a word to him – but his face was so kind. Years later I saw a sahastara karaya when my husband was visiting the whore who used to be my maid. And he told me that I had seen the face of my true love but never spoken to him.’

‘What do you think, Madam?’ Nila asked, turning the woman gently around to the mirror.

The years fell away. Hidden below the gnarled and wrinkled body, a sweet young girl showed her face again. The old lady held her hand to her heart. She no longer had one foot in the grave, for Nila had draped her a young woman’s saree. Modest yet hopeful; demure and pure.

‘Why, Mrs Hettiarchie, I haven’t seen you look this well since your eldest son’s wedding!’ an acquaintance called out from the foyer as Nila gave her a spontaneous kiss on her papery cheek.

‘Young lady, I will have this saree and four more, and let them say I am wasting their inheritance!’ the lady cried, fishing out a crisp five hundred rupee bill from her purse.

Having observed Nila at work, a few of the ladies who’d been chatting with Devika about sarees abandoned her. They found her flippant and not willing to listen. They did not wish to be served by Raju, either. Chatting with someone so handsome could raise the heckles of jealous husbands. And Rangana – well, Rangana was a surly young man who just told them what to wear. And these women already had enough of dictatorial men in their lives. As they unburdened their sorry hearts, Nila found sarees that suited them best.

For the harried mother of two sets of twin boys, she chose a blue-grey chiffon. ‘I haven’t bought a new saree in five years!’ the woman complained in between yelling at her boys to stop sliding down the handrail of the grand staircase. ‘Well then, this saree should suit you,’ Nila advised with a gentle smile. ‘See, it only costs a hundred rupees. And at that price, do you really care if you put a hole through the hem running after your boys?’

Su Dharmapala is a Social Media Manager, writer and blogger. She was born in Singapore and grew up between Singapore and Sri Lanka before immigrating to Australia in 1989. When she is not writing or mothering, she is an avid watcher of that bad reality TV show that is Australian politics while cooking scrumptious feats for friends and family. View all posts by Su Dharmapala