How do we move out of a reactionary space in the arts?  Why is the past important for self-determined futures? What does long-term sustainable change look like by 2050?

Stories from the Future by Diversity Arts Australia is a workshop series that seeks to re-imagine a collective roadmap and timeline towards an equitable future for the arts from the perspective of culturally and/or linguistically diverse artists and arts workers in Australia. Our ongoing project asks culturally diverse creatives, arts workers and artists to reflect on their own experiences and the paths that can be taken forward for change. 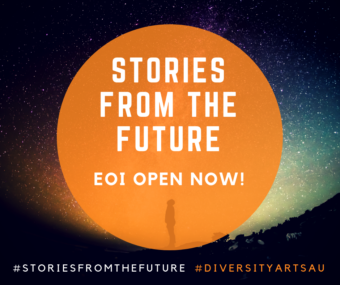 In these meeting places, creating safe spaces for culturally diverse artists to set their own agendas and imagine their own futures is central to taking us outside of the structures that reinforce marginalisation in the creative sector. Self-determination is at the heart of these workshops, but also too reflection, drawing back to the histories that need to be understood to shape the future.

“The idea of these workshops is to literally take people outside of this space, to imagine the future, to articulate a timeline and then to action that. It is important for this work to be done by the CaLD artists themselves – to imagine the creative cultural landscape that we want to be in.”

A mindfulness of histories and the acknowledging of our lineages and the resilience and strength that can be born out of those connections are also a touchstone of the workshops developed by Dr Remy Low of The University of Sydney, with support from Dr Paula Abood and Lena Nahlous.

Earlier this year, we launched the first workshops in NSW, and ideas from the varied artists and arts workers across disciplines have already emerged. They touch on education, policies, and the centrality of Australian Indigenous sovereignty in the cultural landscape. As the workshops move across the states of ACT, SA and WA this year, we look forward to meeting more artists and arts workers interested in exchanging ideas, which will be shared via symposia, films, podcasts, a report and more in 2020.

We invited participant writers to reflect on the Stories from the Future Project, which gathers culturally and/or linguistically diverse creatives from across Australia to imagine equitable alternative futures for the arts. This project is a partnership between DARTS, the University of Sydney and state partners, and receives core support from the Australia Council for the Arts, City of Parramatta Council and Liverpool City Council.

We look forward to sharing more pieces in spaces like Peril, alongside Omar Sakr’s poem ‘Salaat’, as we encourage artists from the workshops to reflect upon their own links between the present, past and future.

To learn more about participating in Stories From The Future, visit the EOI here.

Diversity Arts Australia is Australia’s key organisation promoting cultural diversity in the arts. Forty-nine percent of Australians are first- or second-generation migrants (2016 Census), and we want to build a creative sector that reflects this rich and inspiring diversity.Diversity Arts Australia’s priority in the coming years is on cultural and linguistic diversity, however, we recognise that this should not be viewed in isolation and we actively collaborate with communities of diverse sexuality, physical and mental ability, age, socio-economic status, gender and geography.We want to create the conditions for people from a multitude of cultural backgrounds to participate in our creative sector. We want to see an arts and screen sector that is built on diversity from the ground up, spotlighting the structures, content, conventions and cultural assumptions that are holding us back. View all posts by Diversity Arts Australia