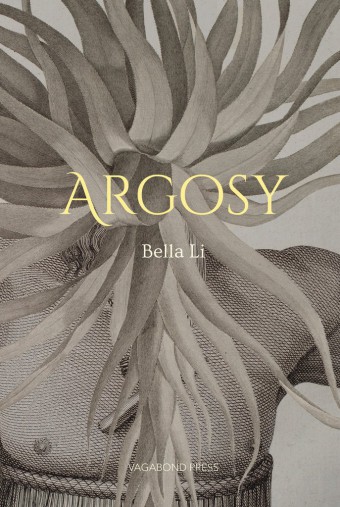 M: Argosy is a beautiful coming together of poetry, visual art, history, and cartography, emergent from the journals of La Pérouse, and informed by collage novels of Max Ernst. The work is of such historical scope, yet always turns back onto this sense of ephemerality, of searching for something that is invisible. What is it that draws you to these themes—that made your initially small project on La Pérouse evolve into a full-length collection?

B: There’s something about the age of discovery, and explorers in general, that I find fascinating. How a sane person could think it’s a great idea to sail off into uncharted territory is beyond me. But in the act of writing, I do feel a kind of affinity—the pull towards the gravity of the unknown, the lure of hidden objects. The search for the invisible was where I began: I had intended to write a suite of poems about the French explorer La Pérouse, who disappeared off the east coast of Australia in 1788, after three years at sea. But early in the project I was side-tracked by the atlases connected to the expedition.

The illustrations in these atlases are startling and beautiful. To translate them into a different medium would be to lose something in the order of the inexplicable, so instead of writing poems I made collages. These grew beyond the scope of my initial project, and became the substance of the first part of the book, ‘Pérouse, ou, Une semaine de disparitions’. The second part, ‘The Hundred Headless Woman’, evolved from longer sequences of poems I was writing—centred on women in history, literature and film—and acts in many ways as a counterweight.

What I wanted to convey in Argosy, beyond the madness of embarking on expeditions of discovery, beyond the exigencies of specific people in specific times, was a general atmosphere of strangeness. Because everything, when you look closely, is strange: people, history, language—language most of all. The more I think about poetry as a genre, the more I see it as a space for estrangement: where language—that which ostensibly provides a common ground on which to stand—can be most thoroughly interrogated.

M: The first section, ‘Pérouse, ou, Une semaine de disparitions’, made me think to poems in Rimbaud’s ‘Illuminations’—each self-contained, yet able to be read as a spring board to the next. The dreamlike language, too, evokes a similar sense of the surreal, though a very crystalline surreal. Did you find that the subject of disappearances led naturally to this writing style?

B: Disappearance, a particular species of the unknown, is a passing from the recorded and catalogued into the unnamed and unremarked, by a path that is unclear. The word itself invites openness, a suspension and deferral of explanations; it can evoke contradictory or incongruous alternatives without resolving them one way or another. It’s this openness and spaciousness that I find most compelling, not only in the poetry of Rimbaud, but in any work of art.

There is, of course, a political dimension to the material on which ‘Pérouse’ is based—in the history of colonial appropriation, the gathering of knowledge often precedes and informs conquest, and the dissemination of this knowledge amounts to an act of erasure. Disappearance creates a palpable gap in the known, one that draws attention not only to the disappeared (in this case, it is the explorer who vanishes), but also to the fact that knowledge is always contingent and never absolute.

To write with an awareness, and in the spirit, of disappearance is to recognise that the persistence of gaps is necessary. The seeking of discontinuities and ambiguities, not only in accounts of the past and present, but in language itself, and their proliferation—the multiplication of possibilities and the refusal of smooth transitions and definitive statements—are uses to which poetry is particularly well suited.

M: Would you be able to talk a bit on the images you created for this book? Across your collage work and photography there is always a sense of the unknown, and a carefully constructed uncanny. There is also a distinct playfulness in the ‘par avion’ and ‘dans le sang’ sections. Did you anticipate the visual art playing a part in such capacity from the beginning?

B: Argosy began with the ‘Pérouse’ collages and the photographs in ‘La ténébreuse’, which were shot during a period when I’d stopped reading and writing poetry altogether. Working in a different medium meant a lot of time feeling my way through the dark, stumbling and making mistakes. But while the material was different, the methodology of collage and recombination was largely the same: in my poems, which are generally inclined towards the visual, I am often appropriating other titles and phrases and themes, disassembling and reassembling.

The book draws on surrealist conventions in visual art, where a sense of the uncanny, as well as playfulness, are central, and whimsy and terror are often conveyed simultaneously. I also wanted to reference and evoke, through the lexicon of images, the genres of horror and adventure—the work of Poe and Lovecraft, Verne and Stevenson—in which the monstrous always borders on, and to some extent draws its power from, the comic—as well as the aesthetics of comics and pulp magazines. Because Argosy, for me, combines all of these influences and traditions.

On a structural level, the collage novels of Max Ernst were crucial in providing frames within which disparate elements, both visual and textual, could come into sharper focus and cohere. This coherence was particularly important: reading is an encounter with the world of a book—an encounter that occurs on its terms, not yours—but it is the task of the author to convince you of this reality. Argosy is first and foremost an attempt to create a world, subject to its own laws, and distinct and strange in its own way.

1 thought on “In The Spirit of Disappearance: An Interview With Bella Li”