“What happens when playful banter…leads to ironic teasing…leads to identity theft…?”

As the performance begins, the gates of the theatre are shut, and the audience is ushered into a small, cramped room. A yellow ring resembling a low circular seat encompasses a single microphone and two actors. The audience is close, and the furthest member no more than two metres away. It is claustrophobic, and this intimacy is used to great effect: there is nothing for us to do but look closer.

In the ring is Mai Nguyen: writer, girlfriend, tracksuit wearer, meditation devotee, Vietnamese Australian. She is a character of great depth and complexity, a result of the crossed lines of globalisation and diaspora. Mai is the legacy of voyages across seas: either by plane or boat.

Perhaps this is the reason why despite being all of the above, she remains trapped within the expectations of ‘Australian theatre’. These expectations involve a boat, some water, maybe death and tragedy.

She has other stories to tell—about phở (which Mai learns to make for her play), about siblings in outer space trying to find a place to call home—but the ‘theatre’ rejects this for the story it wants to hear from people who look like her. ‘Australian theatre’ isn’t for people like Mai. 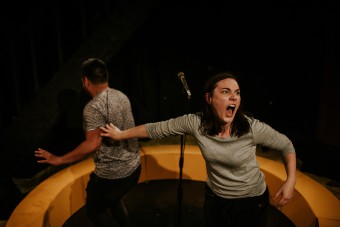 Enter Kevin: security guard, Mai’s boyfriend, gym junkie, white Australian. Theatre is for people like him. Frustrated by Mai’s refusal to take advantage of every opportunity, Kevin attends an industry event in her place. Kevin networks quite successfully, in the way that only a white Australian man can, because these institutions have been built for the inclusion of ‘Kevins’ at the exclusion of ‘Mais’.

Through the connections made at the networking event, Kevin receives a phone call meant for Mai and submits a play proposal without her knowledge.

As Kevin writes, it becomes clear to the audience (but not Kevin) that the story he’s telling comes from internalised bias and reproduces a kind of Vietnamese experience Australian theatre is looking for. However, this is not the story Mai intended to tell. It becomes apparent that Kevin projects the tropes and expectations of White Australian Theatre upon Mai. Ironically, Mai is absent because she’s taken some time off to to settle back into herself, to find some focus around the restrictions that White Australian Theatre is trying to impose upon her art, the expectations that Kevin is perpetuating.

This act threatens their relationship and undermines Mai’s long term career as a playwright.

‘Coloured Aliens’ features humour and provocations in equal measure. It features literal aliens, metaphorical aliens, and the alienation we feel from our friends, family, and professional communities. It plays with the audience’s expectations, assumptions, inherent bias, and the themes we take for granted. 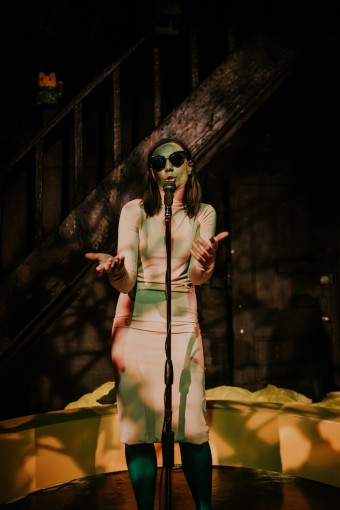 The narrative is pointed in its commentary of racism in arts institutions, and is enhanced by the stage tools it employs. The play uses lighting and story to distinguish the transition from one act to the next, but they are supported by an inescapable voiceover that makes the transition unsubtle and uncomfortable, almost laughingly awkward. It is, perhaps, a suggestion that our stories might always be clearly defined.

Scenes repeat and slightly change, sometimes replaying six or seven times with slightly different conversations and outcomes. This mirroring effect reflects the conversations we have with our loved ones who can’t quite understand the frustration we feel at micro-aggressions.

‘Coloured Aliens’ tells a familiar story: the quest of the Asian-Australian artist in the treacherous waters of institutionalised whiteness, and racial bias that threatens to steer them off course. While the narrative is well-formed, at times it feels a little forced or preachy.

This heavy hand was not necessarily to its detriment, though, because it was enhanced and made humorous by the physicality and timing of the actors. The play’s strength was also in the racially-reversed casting, twisting the message and the lens through which it’s conveyed, with an Asian-Australian actor playing Kevin, and an Anglo-Australian actress playing Mai. This subversion was a great way to challenge the viewer about the perceptions and stereotypes we carry with us.

It is unclear who the target audience may be. Is this play for Asian-Australians? Is the play for white Australians? For theatre goers, or for artists?

I last encountered Chi Vu’s work in ‘Banh Chung’, a performance installation that included the serving and eating of banh chung cake. Mai Nguyen’s piece about phở and the obstacles she encountered in its production felt like an intentional nod to a piece of Chi Vu’s own performance history.

Like ‘Banh Chung’, ‘Coloured Aliens’ left me with more questions than I had expected to encounter—a number of them directed towards my own relationship with the institutional whiteness of Australian theatre, and the ways in which I perform my own cultural identity.

The irreverence of absurdism is an apt device to frame the horrors of institutional racism. Even the double entendre of aliens—‘foreigners’— conflated with extraterrestrial beings, encourages the audience to question assumptions of the status quo. Comedy becomes a way to approach heavy subject matter with a little more ease, and the intimacy of the space meant we were laughing even as we were forced to confront questions that we couldn’t avoid.

I saw ‘Coloured Aliens’ as part of the Melbourne International Comedy Festival, and was delighted to find it was not your usual comedy festival show, with moments of melancholia and awkwardness—but it is laugh out loud funny.