Written, composed, and performed by Australian hip-hop trailblazers Joel Ma (AKA Joelistics) and James Mangohig (one half of the duo, Sietta), ‘In Between Two’ is a stunning and complex collection of family histories, brought to life.

In one short hour, Ma and Mangohig document their beginnings in Australia – Ma, with his extraordinary grandmother, Edie, and Mangohig with his father’s pen pal courtship of his mother all the way in Australia. 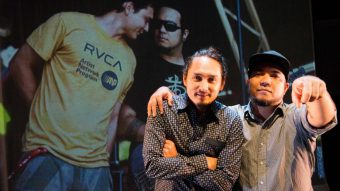 Ma tells a story that catapults us from Sydney to Hong Kong to Sydney again, then around the world before settling back in Australia; Mangohig’s divides between a village in the Philippines—featuring plenty of carabao—and Darwin.

The family histories are rich, packed with stories of unconventional love, eccentric business ventures, triumphs in the face of adversity and, as any migrant story set in 90s Australia is, its share of casual and not-so-casual racism.

The audience is drip-fed each family narrative turn by turn – but this is not to say the show feels divided. In fact, it is much the opposite. 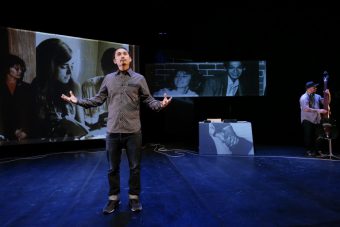 The show itself is of course driven by the experience of growing up bi-racial in Australia, and by the disparate journey each has taken to becoming the hip-hop artists they are today. However, beneath this surface level, there seems to be something more that binds the two musicians’ histories together. Perhaps it is in their telling, but Ma and Mangohig’s stories seem to honour one another, to build upon, support, and fill in the gaps.

Though the two performers’ warmth, openness, and charisma is palpable in their storytelling, both appear to truly shine with their instruments in front of them.

As each take their turn relaying their family’s history, the other sets to creating a vivid, live soundscape as intimate, archival footage projects in the background. This is one example of the show’s flawless pacing, no doubt thanks to director Suzanne Chaundy, and dramaturges William Yang and Annette Shun Wah.

Throughout the show, Ma and Mangohig’s anecdotes are punctuated by frequent laughter. Although they are the ones on stage, there is a sense of dialogue between performers and audience. Even as the show begins, the immediate feeling is one of intimacy.

Though the Asian-Australian experience is as vast and varied as ever—take Ma and Mangohig’s stories, for example—it is clear that ‘In Between Two’ resonates with truths universal to those suspended between cultures.

Closing with a standing ovation, and Ma’s rhymes—‘We are our ancestors’ unfinished dreams’—long echoing in our heads, it is clear that ‘In Between Two’ is a show not to be missed in this festival circuit.