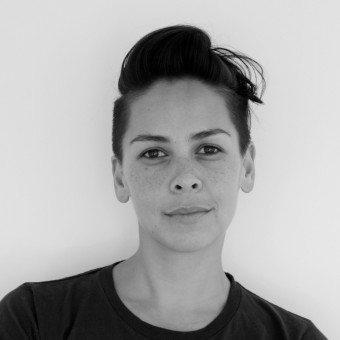 Eleanor Jackson is Peril’s Poetry Editor, and also an active performance poet in her own right, here she connects with Sarah Gory to share her experiences of Queensland as a relocated resident from “down south”.

Home is a very slippery term for me, precious, moveable, and elusive sometimes.

I have tried to define home as the quality of safety and comfort, which is in a way an attempt to open up “home” beyond any kind of physical place. Hopefully so I can have one, I think!

I moved to Queensland for a range of reasons, but effectively to be able to start a family.  Unexpectedly, my plans fell away, some quite disastrously. Fortunately, I have had a lucky period of reassembling, which has meant that Queensland’s slightly tumbled-down quality in my life has been oddly beautiful and rewarding.

When I moved to Brisbane from Melbourne, friends were adamant with me that I would only be able to live in New Farm or West End, depending on if I wanted to have neighbours who were gay men or lesbians. At first I thought that they were joking, that surely stereotypes of a homophobic Brisbane were overstated. I’m not sure that I can disagree with them now, even as I might like to.

West End is changing rapidly. Even the four years that I have spent in the area seem to have changed the racial, socio-economic and political profile of the area markedly, even as I am very aware that this process of gentrification is a much more widespread phenomenon. Nevertheless, I continue to have a fascination with the hyper-local.

As with projects such as the Melbourne Poetry Map, I have long been interested in the way that we embed memory in place, the way that we are all trying to articulate space by virtue of our relationship with it. At the moment, I feel very troubled by place and my relationship to it. Inadvertently, a whole range of changes have unmoored me from my home and I currently have no fixed address, and seemingly no ability or desire to get one.

It might sound like a terrible backhander, but one of the things I like most about living in Brisbane is that I am happy but detached, and aware that if we are to keep moving we really must keep moving. I think that maybe familiarity breeds both content and contempt, but very gentle and tempered varieties of both, because my love is grand, and my criticisms come from the way that things we hate change in the things we love!

Of course Brisbane has “good stuff” – it would be unfair of me to discount the beauty and joy that I have experienced while living in the city. Even more generally, when we consider the unbelievably high standard of living, freedom from widespread conflict and violence, astonishing access to natural resources and physical environments, and the raft of political freedoms that are afforded to Australians relative to many other places in the world, it would seem almost ungrateful to say that Brisbane had no “good stuff”.

But with The State We Are In I did want to evoke that sense of the suburban ambivalence. It’s something that I find troubling in many places in Australia.

Yet many stories are capable of being true at the same time. I regularly see and experience pockets of small but vibrant resilience and resistance here.  When smalltalk subsides, I think that people in Brisbane are just as thoughtful and erudite as most anywhere in the world.  And I have seen incredible art and performance produced by world-class practitioners that has enriched my life here – usually independently produced. I think I may have given up reconciling this, and am current comfortable with the lack of clarity, Brisbane is changing, Australia’s changing, arguably I am changing too.

Because Brisbane is smaller than Melbourne, I have found myself getting more involved in events as an organiser than I may have in a previous phase in my life. I can also be frank and say that I had fewer established social networks in Brisbane and so I am grateful for the chance to have met so many lovely, interesting people by virtue of volunteering my way out of loneliness!

I am incredibly grateful for the way that Brisbane has changed my creative practice. Collaborating with Betsy Turcot on three poetry plays now, and a variety of events and projects, especially, has given me a new insight into collaborating. I have been fortunate in the way that introducing one or more new people into my work has created an inevitable push and pull. Equally, working with Thomas Day to explore Ted Hughes and Sylvia Plath’s work, and to create the film, “Just before you died”, has been a critical turning point in my creative and aesthetic goals. This and other collaborative practice work that I have really only done since moving to Brisbane, has made me ever more aware of just how related my community development background and poetry are: the ethics that guide the ways of working are almost always more important and interesting to me than the outcome of art.

Because I am inside of my own cultural identity, I cannot pick the two cultural heritages – Filipino and Australian – apart; both sides of my family have shaped the person I am. I can’t get under it, I can’t get over it, I can’t get around it, so I just go straight through.

Equally, when I lived in Melbourne I did not feel required to mention that I had Filipino family very often, as many people recognised me as “Eurasian”. Perhaps because I miss being living in a more openly multicultural city, I have found myself being more explicit about my personal background. Perhaps that is because I have been made to feel strangely aware of my difference since moving here, in ways that I had not anticipated.

Issues of identity are intrinsic to my work.

Even when I try to write away from these things, I am struck by a deep feeling of illegitimacy when I try to speak for another viewpoint but my own. Particularly as a performance writer, I am conscious that I consider the body, the way that it looks, the way that it is read, the sound of a voice, the accents and intonation, as much a part of the text as a “page” poet may consider font, spelling, negative space, punctuation and line breaks. My identity as a woman, as a Filipino Australian, as a queer person – in fact on any number of identifiers – is read by people whether they are aware of it or I am in control of it.

I try to remain positive, or at least neutral, to what that reading may be, if I can.

Sarah Gory is a reader, writer, and cultural producer. She is the Director of Queensland Poetry Festival, and has previously worked with Queensland Writers Centre, National Young Writers Festival, and Oxfam Australia. She has had short stories published in The Lifted Brow and Stilts. View all posts by Sarah Gory