‘A fusion isn’t it?’
‘Yes, a multicultural performance I think’
‘Of Shakespeare?’
‘Yes!’

Such were the voices huddled around warm cups of tea in the lobby of the La Mama Courthouse on Sunday afternoon waiting for The Magic Hour to begin. The work, directed by the internationally esteemed Delhi-born Kathakali dancer, actor, language coach and playwright Arjun Raina, heralds a revival of cross-cultural experimentation in the Asian-Australian theatre scene.

Produced by the intriguing and culturally innovative theatre company Cicero’s Circle and originally performed in 2006, The Magic Hour brings together the dramatic arts of the Indian classical dance forms of Kathakali and Odissi, Japanese Butoh and the narrative prose of Shakespearean theatre in a revealing experiment in performing arts. We are told in the notes that:

At a time when the greater political landscape in Australia is moving towards an Asia/Asian inclusive vision, this work, in a very genuine way is trying to locate the form, essence and spirit of Asian art forms, as embodied by Australian performers, in a performance that speaks via the English language, and the works of Shakespeare, to a contemporary Australian audience. This work raises critical questions about the intercultural exercise within a multicultural Australia i.e. the existence and performance of formal Asian art-forms coming together as an integral part of Australian performance.

The intention and premise of this work is thus not only timely, but perhaps overdue. By way of background, classical Asian dance and theatre have been extensively taught and performed in Australia since the 1980s whereupon large swathes of migration saw the influx of accomplished artists from all over. Impressively, many of the resulting groups not only sustained but thrived, penetrating the mainstream Australian arts scene throughout the ‘90s, bolstered by a growing Asian diasporic community. However from the mid-1990s amidst a torrent of politically motivated anti-immigration rhetoric, these art forms and the communities from which they came were once again marginalised – defunded, replaced with English-speaking arts, banished to the annals of ‘community groups’ – even whilst they thrived in popularity amongst everyday Australians. Effectively, the Asian equivalents of Ballet and Shakespearean theatre were treated like kindergarten marble-painting. The chasm in artistic development and creative recognition created by these actions is still being felt by the current generation of Asian performing artists, who battle against tokenistic mainstream views of Asian performing arts as ‘cultural demonstrations’ or ‘community dance’ rather than highly developed art forms in their own right.


The Magic Hour mirrors both the successes and the challenges of this transition: the immense and expansive intellectual and artistic riches of performative experimentation across culturally delineated forms; and the rigidity and incongruity exposed when bridging ancestries that have developed in highly insular and socially marginalized environments.

The work seems to approach this dichotomy in different ways. By using the Shakespearean story of Othello, the audience is predisposed to receiving an intellectually highbrow work that is inarguably a treasure of arts. Thus, the culturally exoticised versions of the characters move beyond the ornamental, as they are so often depicted, to become pivotal and meaningful figures in a historically significant and intimately familiar story. No character is one-dimensional in a cultural sense, and in some cases, characters of traditional classical Indian dance theatre find a perfect match in their Shakespearean counterparts. 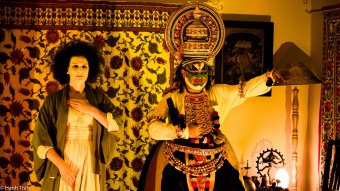 For example, Desdemona, played with effortless grace by Lillian Warrum, is also a Nayika – a heroine figure in the traditions of classical Indian dance. Shifting between the technical accuracy and gestural language of Odissi dance, and the prose of Shakespearean theatre, we encounter a cultural hybrid that we can all understand. Brabantio is another character that employs this tactic. Played by Raina, the audience is baptized early into the visually bold, ceremonious and expressively disciplined form that is Kathakali. However, Raina seamlessly marries the largesse of the Kathakali form with the theatrical typecast of a conservative and egotistical King and father. The strategy is simple, but genius.

The emotionally adaptable, strong yet liquid transformations typical of the Butoh dance-form also provide an appropriate malleability and expressiveness to the work whilst creating a medium for transition between the rigidity of the Indian and Shakespearean forms. Among the most utterly arresting moments of the entire work is the scene where Helen Smith, embodying the mind of Othello, enters into a dance of death, demonstrating the fruits of her rich expertise in the controlled contortive nature of the Butoh form. Similarly Peter Fraser, an exponent of the Bodyweather technique, is hauntingly present in his scenes as the jealous and crazed Iago. Both Smith and Fraser, currently learning Kathakali from Raina are, in their own way, symbols of the changing tides of the Asian-Australian relationship, embodying the notion that these art forms are not religiously or culturally bound.

Homage is also paid to the traditions of theatre and Shakespearean prose by Cherian Jacob (founder of Cicero’s Circle) and Ezekiel Day as a cheeky Roderigo and a most deadpan Othello. Both adept and solid performers, their presence framed and grounded the work nicely.

In terms of the format, rather than delivering the work as one consolidated play, segments of cultural demonstration and explanation, comedy and audience interaction were interspersed from the mid-way point onwards. In some parts this worked, whilst in other parts it diverted from the momentum of the plot and somewhat distracted from the mastery of the crafts we were witnessing. Raina, in his stand-up character of Peter Pilla, also referenced a host of issues such as racism, migration, identity and domestic violence. Though parts of such comedic repertoires were genuinely humourous, they felt disruptive to the flow of the story and at times forced. Perhaps a greater focus on the interplay between the characters within the story could have illustrated some of these points more subtly.

Regardless, or perhaps even because of these disruptions, the show still delivered on its promise to ‘raise critical questions about intercultural exercise within a multicultural Australia’. At times I heard audience members stifling giggles and got the sense that though some recognised the humorous nuances, others were simply confronted with a bold, gaudy, and loud ‘otherness’ of Asian ornamentation that they were unsure how to interpret. These are the points of tension that are most interesting, and exist as a credit to Raina’s work in walking right up to the proverbial line in the sand and poking it.

It is also a treat unlike any other to witness seasoned, multidisciplinary, internationally trained artists with the exceptional skills and stage presence of this cast work together in a piece that in many ways epitomizes the clash of cultures, often finding a common ground between them. There is an untapped richness to be found when merging diasporic languages of the arts into a single whole. At one point in the work Raina refers to the ‘schizophrenia’ of self that is experienced when we don’t know of or feel our roots. For the generations of artists born of migratory descent, it is perhaps these contemporary and culturally hybrid renditions of our stories that may allow a sense of wholeness and identity to begin emerging.

Utterly enchanting and dripping with a worldly history of performing arts.

The Magic Hour will be showing at the Footscray Community Arts Centre from Wednesday 24th August to Friday 26th of August. Details at http://footscrayarts.com/event/the-magic-hour/.