After an initial and very successful flirt with Indian literary audiences, in February this year – through the Melbourne edition of the Jaipur Literary Festival, Melbourne Writers Festival (MWF) partnered with the Asian-Australian Democracy Caucus (AADC) to present Asia What?, a full day of free programming focussed on ideas, perspectives and writing connected to Asian-Australian experiences.

Set over four panel and performance sessions – at ACMI’s Cube theatre- on the final Friday of the festival, Asia What? welcomed a truly diverse set of audiences to listen, engage, and interact with each other and panellists across themes spanning connections with Indigenous Australians, intracultural and intersectional explorations of the ‘Asian body’, as well as the triumphs and challenges of current Asian-Australian literary trends.

The first session of the day was hosted by published writer and community arts worker, Eugenia Flynn,  the author of the blog Black Thoughts Live Here . Entitled Indigenous Connections, it set a nuanced and discerning tone of critical but accessible discourse, which carried throughout most of the day.

Celebrated Australian -Indigenous writer, Bruce Pascoe, and Papua New Guinean poet, storyteller and scholar Steven Winduo, in turn relayed insight into stories of history and their personal experience. They discussed how European psychology forgets relationships between the Asian and  Aboriginal people in pre-colonial times, ignoring evidence of autonomous and prosperous Aboriginal society, in order to perpetuate a systematic exclusion of Aboriginal progress, and to devalue Aboriginal excellence across the world. With regards to the adoption of European psychology, Pascoe further noted,

“The Aboriginal view is that the Earth is our Mother. The European view is that man shall have dominion over the Earth. This is a fundamental difference between our psychologies that we need to examine in our hearts and our minds.”

The concept of story-telling, and writing and reading alternate histories  was also emphasised as a way to begin questioning the dominant paradigm that most Australians are educated under.

“It is time for Aboriginal writers to talk back and refute the historical accounts, and the ideas propagated by European writers who have been predominantly looked to as authorities on Aboriginal affairs” said Steve Winduo, who went on to discuss the ‘literary blindness’ that exists regarding relationships with the Asia Pacific, as well as the threat of technology in erasing oral knowledge systems held in folklore, and how the lack of representation meant the complexity of Australia was not being understood, creating imagined borders, and isolationist tendencies. Such sentiments, introduced not with outrage or accusation, but a genuine plea for consideration and critical questioning, were knowledgeably curated by Flynn, and received nods and thoughtful questions by the varied audience members.

Genealogies of the Body was the second session of the day, curating performances and discussions by Singaporean-Tamil writer and social media activist, Sangeetha Thanapal, and convenor of the AADC, and artist and writer of Malaysian-Chinese descent, Shinen Wong,     with the aim of exploring what makes bodies ‘Asian’ and how history is narrated and carried in bodies. They discussed their process in working together, referencing how a consciousness of historical appropriation and discrimination influenced their thinking in adapting to each others forms in Bharatanatyam and Chi Gong martial arts, respectively.

Wong spoke of creating the performance as a way of reclaiming the Chinese heritage that was lost in adapting to Chinese-Singaporean national identity.

Thanapal, known for coining the term ‘Chinese privilege’ through her online activism regarding racism in Singapore, referenced the idea that people of colour are equally as capable of similar discriminations as colonising powers when certain power structures are implemented in a society. She noted

“There is an assumption that non-White people are always innocent of racism, but in places like Singapore, Sri Lanka, Burma, racism is purported by people of colour. This is normally left out of the discourse.”

Whilst deeper political, theoretical and artistic ideas around this theme were only summarily visited, the workshop was an inclusive exercise in cultural camaraderie among the various participants. Coaxed by the candour, vulnerability and sincerity of Thanapal and Wong, bodies of varying age, shape and cultural backgrounds could be seen giggling their way through gestures and confessionals around the room, many of them staying on after the session was finished to discuss their own histories and stories with others in the room .

The afternoon’s panel, Beyond Authenticity, brought a suite of diverse Asian-Australian writers spanning poetry, novel, screenplay and literary research, to uncover and dismantle the tropes of Asians in Australian literature. Panellists Allison Chan, Melanie Cheng, Ra Chapman and Dominic Golding shared their work in quirky, poignant and hilarious testament to the multiplicity of voices that comprise Asian-Australian experience. Multiplicity indeed became the catch-cry that resulted from the subsequent workshop, as groups around the room developed their own Asian-Australian literary narratives to compete with the mysticised, eroticised, criminalised, Orientalism -overrunning Asian-Australian fiction – a point devastatingly made in Golding’s research presentation of Dymocks fiction novel covers.

Flynn’s questions to the panellists brought out their deep and significant insights regarding the importance of writing for the construction of identity in the face of a dominant sociological construct that tends towards ‘Otherness’, as well as the responsibility of each individual to question their own perspectives and understand cultural inheritance as a moving feast, rather than a fixed property – attributable to an individual with a particular background.

Chan says culture is not fixed.

“It is a messy blob that we can come to appreciate rather than monetize.  The people of colour around you are not your educators. We need to look at identity beyond geography. Not all of us can speak for our people. What is your place on the country you live on? What role do you play in the community you are around?” she said.

Cheng, of Chinese-Australian heritage, who is often mistaken for a non-Asian person, fantasised about a future ‘beyond Asia’ where multiplicity was ingrained in thinking, while Chapman relayed her own process, telling the audience they should ask questions.

Echoing the thoughts of his panellists, Golding put the onus on the audience, 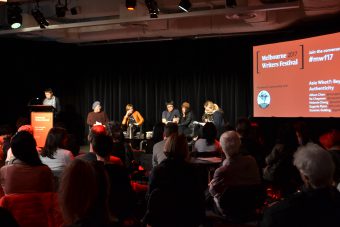 In such moments, it felt that the Asia What? was successful in providing, not an education, but a sense of cultural literacy to the audience in attendance . Moving beyond presenting marginalised or politicised perspectives, the sessions resulted in a fraying of the traditional boundaries between ‘what’ and ‘who’ is and isn’t considered Asian, as well as revealing a complicity that all Australians have with our nearest continental neighbours and their cultural exports.

By programming discussions regarding the relationships to Indigenous history and peoples at the outset of the day, the subsequent sessions were placed within a greater discourse around the way in which dominant ideologies of colonialism can influence and subvert genuine cultural and historical assertions of identity. They also located the ongoing persistence of Indigenous Australians in reclaiming their sovereignty and culture as a central axis point of learning for other migrant communities. However, the sessions avoided becoming overtly political in their nature, focussing instead on the experiences of Asian-Australians as told through their writings, and relating these experiences to the broader society and culture of Australia in 2017.

As a testament to the value of such an exchange, the last session of the day was the Writers Across Borders session, showcasing writers from the WrICE (Writers Immersion and Cultural Exchange) program, which brings together five Australian and five Asia-Pacific writers each year in Asia and Melbourne, with the aim of generating intercultural and intergenerational dialogue. This year’s writers included Christos Tsiolkas, Daryll Delgado, David Carlin, Ellen van Neerven, Else Fitzgerald, Francesca Rendle-Short, Jennifer Porter, Martin Villanueva, Steven Winduo, Susie Thatcher, Nha Thguyen, and Norman Erikson Pasaribu, who each presented their readings and performances at the festival. The sheer breadth of subject matter and style of writing or presentation suggested further that intercultural exchanges, querying the various intersections of cultural inheritances and adaptations, are fertile grounds for literary innovation, inquiry, and storytelling.

Events such as Asia What? scratch the surface of what is possible when mainstream arts festivals and institutions begin to embrace, invest in, and work alongside existing independent and community organisations in enacting projects and ideas. While MWF is traditionally known for internationally renowned speakers and authors, events like Asia What? enforce the importance of empowering local communities and artists to further socio-cultural, creative and intellectual engagement between marginalised cultures and mainstream society.