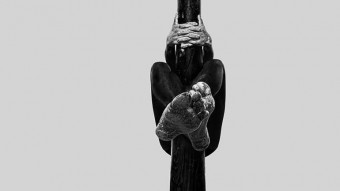 Debuting for AsiaTOPA at the Arts Centre Melbourne last night, One Beautiful Thing sees renowned circus-arts theatre company Circa collaborate with practitioners of the Indian wrestling sport Mallakhamb to deliver this feature-length work. Commissioned by AsiaTOPA and developed between India and Australia the work sees six Mallakhamb performers and piano virtuoso Utsav Lal collaborate with the Circa ensemble under the direction of Yaron Lifshitz.

One Beautiful Thing seeks to ‘bring two cultures face to face’ and to contrast and reflect those cultures in pursuit of creating ‘one beautiful thing’. Set in three parts, the work moves between Circa’s trademark acrobatics and dramatism while inserting nuances of Indian culture and life and the Mallakhamb tools of acrobatics into the conceptual narrative.

This work was clearly one of high anticipation, with audience members readily sighing in wonder, whispering their wows as the first section unfolded in lively tempo. Representing the passageways of people in gatherings and the chaos and harmony of pedestrian living, the work unfolded into an exploration of ways of being in relation. The performers, held by the sounds of the street and voices apparently recorded in India, interacted in dynamic sets and postures before slowing to weighted and emotive duos involving both Circa and Mallakhamb performers. Once the stage was warmed, the Mallakhamb pole was introduced, dramatically lit, hushing the audience. One by one the performers began their feats, some of them awe-inspiring; a small introduction into what this form was about.

The second section, focussing on the women of the ensemble, was accompanied by Carnatic pianist Utsav Lal, bringing an elegant yet dramatic temperament to the slowed momentum of this segment. A dim candle-lit homage of rope-work and acrobatics unfolded in turn, rising with the crescendos of the piano. The energy and atmosphere of the second section felt somewhat muted and sometimes uncertain in its narrative intent, but luckily the best was certainly saved for last. The final section of One Beautiful Thing gives the audience what it was waiting for all along, demonstrating the beauty of the Mallakhamb art and the personality of its practitioners. Having been somewhat inducted into the nature of the form from earlier in the show, there was near pin-drop silence in watching the practitioners each demonstrate their abilities. Interspersed with this was the impressive feats of the Circa ensemble, mimicking the aesthetic stylings of the Mallakhamb performers in their acts. Notably, the Circa ensemble did not interact with the Mallakhamb poles or form in any visible way, but there was a sense that the third act was an opportunity for the international performers to shine.

The Mallakhamb form is rigorous and fast-paced, demanding both strength and flexibility from its practitioners. In its application it resembles the force and temperament demonstrated by early practitioners of Ashtanga yoga such as B.K.S Iyengar and Pattabhi Jois, even portraying postures of the form in its repertoire. The Mallakhamb performers, particularly the women, also engage in the Mallakhamb rope acrobatics. Whilst it appears at times that these performers are not as advanced as the women in Circa on this apparatus, it must be understood that they are actually demonstrating a different discipline – that the practice of Mallakhamb is not aimed at achieving increasingly complex tricks on the rope, but to master a series of postures and to complete them with physical aptitude and aesthetic clarity. Unfortunately this information was not communicated through the work or its notes.

Without doubt the exemplary styling and delivery that audiences have come to expect from Circa’s work is present in this show. But putting that aside, the merit of the work, its conceptual choices and its success in achieving the AsiaTOPA ideals must be visited. One Beautiful Thing is flagged as a representation of what can be achieved in collaboration and in mutual celebration of, in this case, the acrobatic practices of India and Australia. Its commissioning included periods of development both in Australia and in India for the ensemble. However the work does not reflect a strong narrative or conceptual framework regarding the dialogue or cultural exchange that was likely inherent in this process. Beyond witnessing it’s feats, the audience is not privy to insights regarding either the tradition of Mallakhamb, its rituals and practices, or the way in which the Circa ensemble engaged with the form. Segments of group performance feel jarring due to the obvious differences between the abilities of the performers from the two groups, and it seems that the nature of the physical aesthetic and vocabulary of Mallakhamb art-form is not explored beyond its sheer bodily vigor. It’s practitioners are shown within the vernacular of Circa’s existing choreographic language – at which the Circa ensemble is clearly practised – rather than demonstrating a new medium forged between the two performing traditions.

The practice of Mallakhamb is preceded by a long history and a philosophy of training. In contemporary India, Mallakhamb is practiced as a sport, and though it is demonstrated, it is rarely as an artistic or theatrical performance. This is an important distinction to be made in considering the differing approaches imbued in the performers from Circa and the practitioners of Mallakhamb.

The intent of collaborations such as One Beautiful Thing should be encouraged, but their successes must be evaluated if we are to have true artistic growth. With the platform of AsiaTOPA now running triennially, the capacity for intercultural arts exchange and development is widened, allowing an opportunity for us to take steps forward in how Australia and its mainstream arts community engages in mutual exchange of creative direction and cultural concepts from counterparts in Asia and beyond. This inevitably involves learnings and successes, but is ultimately most fruitful where collaborations are cultivated and grown with long-term vision and an understanding that the intent is to get to a third place – a place of discovery and creativity outside the safe and familiar formulas of either the home culture or the visiting culture.

One Beautiful Thing is a pleasure in many ways, and the pace and momentum of the Mallakhamb form certainly left an impression on the audience. Hopefully the momentum set by AsiaTOPA in commissioning this collaboration allows for meaningful cultural exchange to facilitate a greater artistic vision in the future.