This is part of a series of ekphrastic poems presented alongside ‘Hyphenated’ at The Substation. ‘Dreamlines’ responds to Andy Butler’s ‘Self Portrait of the artist after Gauguin x Koons x Louis Vuitton’ with LOUISE MEUWISSEN. 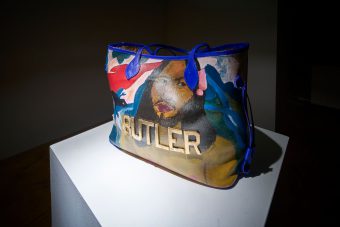 Of Koons, of Vuitton. Of Gauguin’s
women, the old unwavering gaze.
Of luxury disguised as the unattainable,
reflection of the bowerbird’s eye,
ultramarine. Of myth, of money,
of memory: Billie’s white gowns,
white shoes, her white gardenias
and white junk. Of the people
who use us. Of how steadily things
fail themselves, and how empty
of remorse, of the moment before
regret, our faces unrecognisable
as replicas. Of the man who stands
at the threshold of that life,
who looks in and wants nothing.

Model Minority In the West, a model minority is revered for their story of struggle, overcoming barriers, and integration and success under capitalism and colonial values. They’re a little bit exotic, their accent is easy to understand, they may become a lawyer or a surgeon, they always know their place. They never gather in groups larger than three. Their singular success reminds us that no one is racist. A model minority is always a sidekick to the White hero. Model Minority imagines the career of a ‘diverse’ contemporary artist who has assimilated in to the recognised White artistic cannon. The works reflect the practice of Jeff Koons, who holds the record for the highest selling artwork of a living artist (Balloon Dog, US$58.4 Million in 2013), and Koons’s recent collaboration with Louis Vuitton. Butler’s work imagines replicating the financial and cultural success of White art-stars, while playing on the love of America and replicas of foreign luxury brands in a developing country like the Philippines. Through the aspirational consumption of status symbols, one can hope to reach their full potential. Model Minority places the ‘diverse’ artist in the centre of the White art narrative and plays with the racial tensions that arise. It pays homage to one of the latest trends in luxury fashion and contemporary art – brown people.

Andy Butler (b. 1987) is a Filipino-Australian writer, artist and curator. Originally raised in Kalgoorlie and Perth, he is now based in Melbourne. He holds a Bachelor of Arts in Literature and Philosophy with first class honours from the University of Melbourne. Andy’s writing has appeared in Overland, Art+Australia and PEN Melbourne Quarterly, and he has written catalogue essays for exhibitions at Chapter House Lane and First Site galleries. He has curated exhibitions at First Site gallery, and at BLINDSIDE, through their 2017 Emerging Curator Mentorship program. He is a participant in Footscray Community Arts Centre’s Emerging Cultural Leaders program, was a participant in Arts Access Victoria’s inaugural Activate program, has been awarded a Glenfern Fellowship by Writers Victoria and has performed at the Emerging Writers Festival. In 2018, he will undertake a residency at Police Point Shire Park on the Mornington Peninsula. As an arts worker and educator, Andy has worked in audience engagement and public programming roles at ACMI and the NGV. He is the Festival Administrator for Melbourne Writers Festival, and has delivered arts workshops for adults and children. He has run philosophy workshops for primary school students from culturally diverse backgrounds, and workshops on respectful relationships and gendered violence for high school students in the western suburbs.