“I have arrived, I am home”

“I have arrived, I am home”
Messages of meditation
Amongst straight young pine trees
The green tea plantation mountains
Surround the Prajna inside

“I have arrived, I am home”
With this sangha I am never alone
Touching the earth I see
The seeds of my ancestors in each cell of my body
War, rape and illness exhaled
Soothing my soul with ritual
I grieve, I heal, I inter-be. 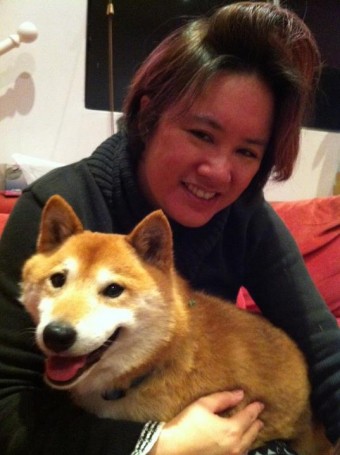 Believing in psychics and ghosts – interview with Hoa Pham

Assisted by Tom Cho and Tseen Khoo as editorial advisers, Hoa Pham founded Peril Magazine.  While Tom and Tseen have embarked on other exciting projects, Hoa has stuck around as editorial adviser and as president, nurturing Peril behind the scenes.  While Hoa is known as a writer, her commitment to political advocacy in the areas of arts, mental health and social justice led her to bearing the position of President of Australian Vietnamese Youth Media as well as running as the Australian Greens Candidate for Victoria in the Victorian Election 2006 and the Federal Election 2007.

Hoa’s first novel for adults, and her fourth book, Vixen garnered her the 2001 Sydney Morning Herald‘s Young Writer of the Year award.  Her other works include young adult and children books.  She has also written plays, including Silence which explored intergenerational trauma and sexual violence within a Vietnamese family.

Hoa identifies as Vietnamese-Australian, however, “more Australian than Vietnamese”.  “I’m like your typical banana that I was born here, but I was brought up with Buddhist and ancestral worship.  I went to an all-white Christian school, but I still identify strongly with Vietnamese Buddhist even though I don’t speak my own language”, she reflects.

Hoa’s writing is driven by passion and curiosity and other-wordly matters.  “That’s my guiding principle.  Psychics and ghosts are what I’m interested about and so that’s what comes up in my work,” says Hoa.

Hoa’s latest novel, The Other Shore, is about a psychic, “who raises the dead with the living”, the story “absolutely grounded in Vietnamese cultural history and socio-political stuff”.  The Other Shore is based in Vietnam and America, and Hoa is examining how one can live ethically and spiritually in a secular world.

“I’m always fond of the ‘what if’ question – how do you maintain being ethical and Buddhist in a world that isn’t?  The current Communist Government is very corrupt.  She ends up fleeing to America but then ends up in a detention centre.  The democracy that’s being applied, in the same way that it’s in Australia, with asylum seekers, you don’t have any rights.”

For the socio-political context to work, Hoa located The Other Shore in America rather than Australia, “because of the fit in terms of resolving the American war and Vietnam war”.  In terms of history, there’s “the Northerners and the Southerners and the Americans, and the Australians tagging along, but you don’t hear a lot about that”.

“It can’t happen anywhere but Vietnam, because in Vietnam they have a military parapsychology unit that’s staffed by psychics, all of the concepts around that and the cultural concepts, acceptance are based in Vietnam.  When she goes to America, she’s understood by Vietnamese diasporic people, but not people outside of that cultural milieu.  In the story, Anglo Americans think that she’s mad, because they don’t believe in psychics or ghosts.”

Unfortunately, trying to get publishers to back her book has been difficult.  Hoa has had five rejections for The Other Shore.  She’s also had a UK agent try to sell it to Europe, but was told that the work was “too short”.

“The responses that I’ve got have ranged from ‘this is really good, but it’s not our cup of tea, we’re a commercial publisher’, to the editor saying that they were uncomfortable with the spiritual aspect of the work, so duck for cover sort of thing.”

While trying to sell her book has been a hard slog, Hoa had recently won a Writers Victoria CALD (culturally and linguistically diverse) Mentorship program for emerging and established writers.  The mentorship is with historian and author Maria Tumarkin.  I’m also lucky to be one of the winners of this program.  In our first session with Maria and all the other writers – Beverly Almeida, Fatima Sehbai, Hariklia Heristanidis – the relief from everyone in discussing and venting about how difficult it is not to fit into an Anglo-Celtic-Christian Australian literary framework was a huge relief; there was no need for justifications or explanations, everyone just got how normalized and pernicious this system has been and unfortunately, still is.

For the mentorship, Hoa is working with Maria on The Other Shore, and consulting with Maria has given Hoa newer insights into her work.

“I think because of the Asian-Australian label and what Maria Tumarkin said to me was that – at the heart of book is the war stuff, what do you do when you’re overwhelmed by history?  That’s the heart of it.  It’s not the girl meets boy young adult arc narrative that my agent wants.  One of the things that I talked to her about is, my agent is doing x and is suggesting this, and what kind of compromises can I come to?  Because I haven’t had a book published, I’ve had a play published, but not a book published in such a long time, I’m willing to sell out but not sell out too much if that makes any sense. I was asked to cut down on the temple scenes in the manuscript, and when I’m looking at expanding it, I need another 5000 words, I’ll write about more spiritual stuff.”

Hoa’s struggle in walking the tight rope of wanting her book out in the world and not selling out is a huge tension, especially if her agent is also unable to shift from their Anglo-Celtic worldview. “I’ve always encountered this problem.  With Vixen my first adult novel, the first rejection I got said, ‘This has really stayed with me, but make it all Vietnamese history and cut out the Australian bit.’”

While I join Hoa in laughter at the absurdity of the feedback that she’s received, Hoa focuses on the issue at hand with some pragmatism and hope.

“I’ve had a rocky path, but I think almost everyone who has been published in the last five years has been knocked back by a few people and as they say, with dating, you only need one.”

The other work that Hoa is currently working on, which she projects to be realised in the next five years or so, involves a relationship between a Vietnamese and a Japanese international female students.  In this work, Hoa is trying to explore how people survive disasters.

“The Japanese protagonist loses her family to Fukushima and the tsunami, and she survives a student shooting as well.”

However, the protagonist doesn’t live long, but her lover does.

“So, it’s all about how do you make compromises to survive?  Because the lover is forced into a marriage, is Vietnamese and traditional Vietnamese, and she says, OK, I can manage to have a marriage for my parents and have a lover as well, but the lover doesn’t see it that way.”

In terms of poetry and writing, Hoa started writing when she was 15, even though forbidden from her parents, she persisted, and “did more of it”. For her, writing fiction can enable the author to be a “god in fiction, in a way that you can’t in other fields”.  Her first live experience of poetry was with Myron Lysenko.

“He was a big guy, and he came to talk at my school, which was really odd because it was this big guy with a motorcycle, very working class in this posh private girls school and he was doing spoken word poetry that was really raw, and I just loved it.  Oh wow.  More than the Sylvia Plath poetry.  That was some of my first formation experiences.”

For the Peril Map project, Hoa is contributing “Thich Nhat Hanh – Zen Master” a piece that she wrote for Peril #4 “The Meaning of Life”.  Thich Nhat Hanh was exiled from Vietnam in 1965.  His exile resulted from his non-violent peace stance, and his leadership of the Buddhist community opposing the Vietnam war.  “Martin Luther King Jr. nominated him for the Nobel Peace Prize, he was exiled by the then Southern government because they thought he was too powerful,” says Hoa.

“Thich Nhat Hanh – Zen Master” was written after Hoa returned from her pilgramage at the Prajna Monastery with Thich Nhat Hanh in Vietnam in 2007.  Unfortunately, the monastery was destroyed by the Vietnamese Communist government in 2010, a year “when Vietnam was on the head of the security council in UN”.  “I’ve seen Wikileak documents showing that the US government knew that it was happening, and they just weren’t interested”, says Hoa sadly.

During his exile, Thich Nhat Hanh visited Vietnam twice, however, his visit was “conditional that he was able to teach and he was able to sell his books”. “He also asked the religious police to be disbanded but it went down like a sack of holes,” sighs Hoa.

“I can’t see a time when he’ll be able to return, he is already 80 years old; unless something amazing happens in the current regime.”

“I was at Prajna Monastery and there was like 10,000 people there, they were all really calm and chilled. Every time I’ve been in crowds that big, it’s usually when people are drunk, it’s like a rock concert sort of thing, but people were here to genuinely experience a Buddhist practice.  He had a workshop for three days in Prajna, and it was the most amazing experience.”

I read Hoa’s poem like a prayer of thanks from having been part of a historic and momentous blessing ceremony.  When I ask Hoa where she would like to pin her work, Hoa says,  “Probably Nhap Luu monastery in Beaufort (an hour out of Ballarat). It means entering the stream and the monastery follows the Thich Nhat Hanh tradition”.

Even though Prajna monastery is no longer, perhaps for Hoa, there can be some comfort that she was one of the 10,000 with Thich Nhat Hanh.  As she writes in her poem,

“ ‘I have arrived, I am home’
With this sangha I am never alone”

Hoa Pham is the founder of Peril. She is the author of seven books and a play. Her novella The Other Shore won the Vive La Novella Priize, and her book Wave is being adapted to film. For more information please visit ww.hoapham.net View all posts by Hoa Pham