For most Melbournians, the word ‘stripper’ conjures up images of barely clad women gyrating against poles, or a Hollywood heartthrob crunching his six-pack over low-slung jeans. But in the underground nightclubs of Manila, a different kind of stripper exists. One that dances to slow emotive ballads, without props or costumes, and is exclusively the domain of young men. Namely, the macho dancer.

Set in the dark and smoky recesses of AsiaTOPA’s XO State Dusk, the rather intimate audience is seated surrounding a long and narrow path – a trademark of the strip tease stage. As Jocson slams a heavy boot heel on the stage stairs, every voice in the room is hushed. The dancer walks onto the platform with an air of composed yet almost callous dominance. She wears tiny denim cut-offs and a simple singlet. And when the classic rock begins, so does she.


Macho dancers are known for dancing to ballads, animating an emotive quality that is slow and purposeful. Although some of the songs evoke a quality of humour, Jocson grounds them in a serious demeanor, unwavering in her solemnity during the course of the performance. The power she asserts over the audience is immediate; they are silenced and almost uncomfortably engaged in what is being presented. The irony is unavoidable. 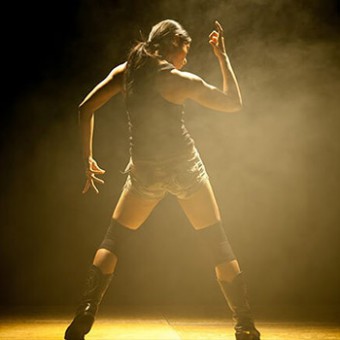 Although Jocson goes some way towards exploring the tensions between herself and the audience, stepping into the aisles at one point, the performance feels at times confined to the persona she has established. Whilst the ‘masquerade of masculinity’ is clearly visible, when Jocson emerges at the end of her performance to receive applause, the nature of her smile – depicting a self we have certainly not yet witnessed – suggests that the binaries of her own personality against that which she has exhibited have remained somewhat unexplored in the work. At least not visibly so. The experience of Jocson’s inhabitation of the macho dancer persona, and its connection to her natural manner of sexual and gender orientation, is a relationship that represents further inquiry in this work.

From the standpoint of choreography, it was particularly interesting to observe the translation of the macho dancer’s performative vocabulary into abstraction. Jocson dissects and slows down the trajectories of her movements, and in the absence of sound, we are introduced to the macho dancer aesthetic as a form independent of the inferences cast upon it by the context of music or its natural environment of a strip club. Jocson’s physicality is impressive and her entire body projects a state of awareness that is sobering to the viewer; one is unable to look away.

Co-curator of the XO State program for AsiaTOPA, Jocson is an accomplished performer that brings an interesting contribution to the festival. A Macho Dancer worth watching.